In case you missed it Priyanka Chopra and Nick Jonas officially confirmed their engagement over the weekend after rumours had been spreading for quite some time that they had taken their whirlwind romance to the next level.

The exciting news was confirmed by the pair on social media in a beautiful photo from an intimate engagement photoshoot in Mumbai.

26-year-old Jonas captioned the gorgeous pic with, “My heart. My love,” while 36-year-old Chopra posted the same photo with the caption, “Taken.. With all my heart and soul.”


The snap also showed off that dazzling diamond sitting on her special finger and seriously hot damn.

Since confirming the news to their fans the couple have already celebrated their engagement party in a traditional Indian ceremony, known as a Roka ceremony, in Mumbai surrounding by their friends and family.

Afterwards the couple kicked up their heels and threw a rager of party, with Nick posting a video of his future bride dancing to his Instagram story, captioning the clip “celebration time”. 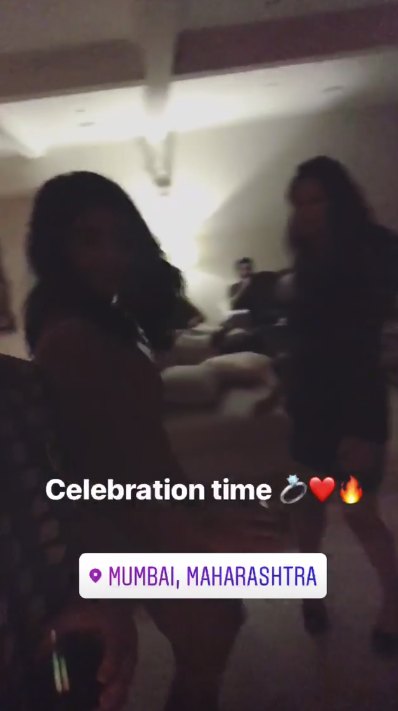 Friends and family members have also been sharing photos from the celebration with Nick’s mother Denise Jonas posting a number of photos from the night including pictures with Priyanka’s parents, showing that their families have already become one.

Priyanka’s future sister-in-law, Game of Thrones actress Sophie Tuner, also took to Instagram to congratulate the happy couple and saying that she is “so excited” to welcome Priyanka into the family.

Nick and Priyanka first began dating in May 2018 and it’s reported that the Jonas brother popped the question in late July. And seriously we ship this relationship SO DAMN MUCH!

Congratulations to the happy couple!