April 26 — the 116th day of the year, the day both T-Boz (of TLC) and Channing Tatum were born, and in just a few days, it will be known as the day both Taylor Swift and Kim Kardashian released game-changing products to the world (a little dramatic, but you get the point). Let’s hop into this boiling hot tea, shall we?

Okay, it’s not news that T-Swift and Kim K aren’t BFFs. However, they’re no longer enemies either — per Kim on Watch Happens Live with Andy Cohen earlier this year. So, when Kim announced on Monday that her new perfume collaboration with her sister Kylie Jenner is set to launch on April 26, many fans were like: “now we got bad blood” (see what I did there).

See, Taylor announced last week that she’s releasing something huge, something great, something life-changing — seemingly new, long-awaited music, — on April 26 and she even launched an entire website with a countdown to mark the big occasion. So, when Kim announced the impending arrival of her new perfume just days after Taylor dropped her countdown to April 26, let’s just say Swifties weren’t too happy about that. So much so, Taylor fans began commenting on Kim’s perfume announcement, accusing her of trolling Taylor.

“You guys so [decided] to launch it on the day Taylor Swift relases [sic] her new single. Do you really have nothing else to do other than trying to steal her spotlight. I mean, there are sooo many other dates…,” one T-Swift fan wrote.

Another added: “hmm…. April 26? the same day as Taylor’s Swift’s announcement. THIS IS WHY WE CANT HAVE NICE THINGS :/ (would put a rat, but rats are nice, sweet animals who don’t deserve to have people have them).” 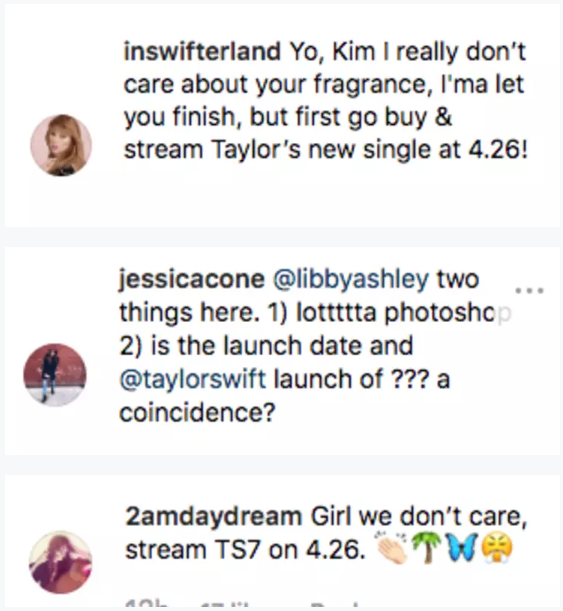 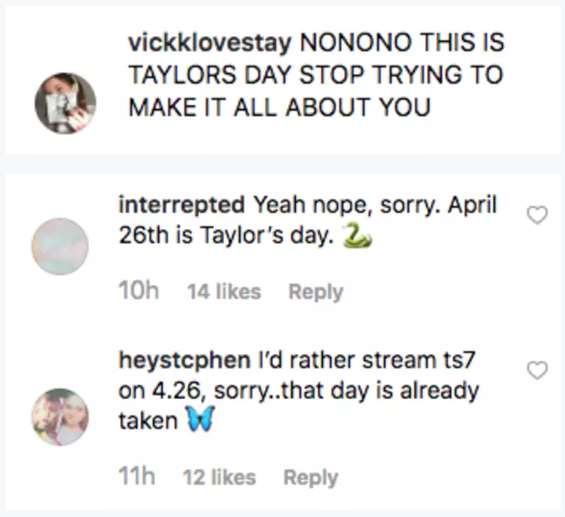 Now, for those of you who aren’t familiar with the ladies’ history of beef, which may shed more light on this situation, let’s take a quick trip back to 2016.

It was the year Kim, Taylor and Kim’s husband Kanye West clashed over lyrics to Mr. West’s song “Famous.” On the track, Ye raps “I feel like me and Taylor might still have sex/ I made that b*tch famous.” Once the song was released, Taylor made it clear that she was offended by the lyric, which caused Kim to leak clips of a call between Taylor and Kanye as alleged “proof” that Taylor heard the song and knew the lyric was in there. However, Taylor vehemently denied hearing or approving the lyric, saying she never heard the full song.

“You don’t get to control someone’s emotional response to being called ‘that b*tch’ in front of the entire world,” Taylor wrote on Instagram. “He promised to play the song for me, but he never did.”

Since then both ladies have taken sly shots at each other over the years. However, in January, Kim said she was “over it,” when asked about their old drama, adding, “I feel like we’ve all moved on.” Guess the jury’s still out on that one.