The world of television was rocked last year when Channel Nine star Lisa Wilkinson made the shock decision to leave her post as co-host of the Today Show after issues with pay parity.

Not long after her surprising departure in October, Lisa changed networks and became one of the hosts on The Project on rival station Network Ten.

And so last night as people tuned in to one of Channel Nine’s biggest television programs, people everywhere were shocked to see Lisa’s face pop up half way through the show, just seven weeks after quitting.

But she wasn’t there to read the news or have some laughs with the Today Show team. Lisa was back on her former employer’s station to cheer on her son Louis FitzSimons as he attempted to conquer the Ninja Warrior course on the highly popular show Australian Ninja Warrior.

Host of Australian Ninja Warrior and another former Today Show employee Ben Fordham made the announcement to the crowd and the audiences at home that a familiar face was in the audience. The cameras panned to find Lisa sitting in the bleachers, grinning from ear to ear as she waited for her son to demonstrate his skills on the tough course.

Lisa’s husband Peter FitzSimons and Louis’ two siblings, Billi and Jake, cheered on Louis from the sidelines of the course and jogged alongside him during his impressive run.

“Although I am my parents’ son, I am my own man, and I’here to prove that today,” said Louis before he made his attempt on the course that tests agility and strength.

Louis hyped himself up as he waited for the buzzer to start the course. Lisa could be seen watching on proudly and was grinning as she filmed her son with her phone. 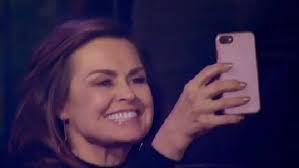 Unfortunately the Ninja Warrior course defeated the youngest FitzSimons and he fell into the water on the third obstacle, the Bridge Of Blades. However, his efforts still scored himself a spot in the semi-finals.

Lisa posted a photo to her Instagram account last December which fans now realise was a hint to her son competition on the Ninja Warrior course.

The first round of Australian Ninja Warrior continues tonight at 7:30pm on Nine.