The first look at Luca, Disney and Pixar’s new feature film has just been released and it looks like a summer holiday dream!

The trailer is set in a beautiful seaside town on the Italian Riviera, showing Luca’s teenage coming-of-age story, experiencing an unforgettable summer filled with gelato, pasta and endless scooter rides – yes, everything you dream of doing when you visit Italy. 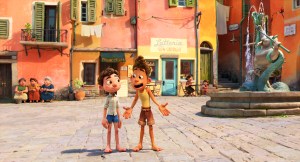 Luca and his best friend share the most wondrous adventures but they’re hiding a big secret, they are sea monsters from another world!

Here's one of our favourite moments from Robin Terry & Kip!
disney Luca pixar

The First Trailer For Disney's Cruella de Vil Is Here And... I Mean, Evil Has Never Looked So Good!

Samantha's Absence From 'Sex & The City' Has Been Explained And... Ouch?