The streaming giant ran a joke about one of its characters going through men “faster than Taylor Swift”.

Taylor Swift hit back at this by saying, “How about we stop degrading women by defining this horse shit as funny?”.

With the start of Women’s History Month, she also tagged Netflix, the company that previously published her documentary stating: 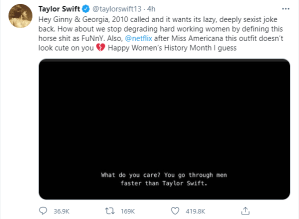 Taylor Swift is no stranger to being used to make fun of within the industry, which is exactly why she wrote her song “The Man” explaining exactly how our society is so macho and how this wouldn’t happen if she was a man.

What do you think about Taylor Swift’s past relationships constantly being used as a joke in the media industry?