reactions from the audience In Sydney’s qudos Bank arena

We live in a world chockablock full of talented people; a lot of whom are fantastic singers. Some are even great dancers to top it off. And a very rare few have the unique ability to put on an incredible performance.

P!nk is is not only all of the above but she’s one of those, as she would say, rare unicorns, that also has the ability to make you feel so many different emotions. And she demonstrated this during her concert at Sydney’s Qudos Bank Arena last night.

Like a phoenix from the ashes, P!nk arose and proved that no amount of sickness or bad press can stop her from doing what she does best…and that’s putting on one heck of a show-stopping performance!

Saturday August 11 was the Grammy Award winning singer’s first concert back since a nasty respiratory infection and gastric virus forced her to postpone four Sydney shows of her Beautiful Trauma Tour. And let’s just say, as expected of course, she returned to the stage with an almighty bang!

Thousands of fans, paired with their tour T-shirts and pink wigs, flocked to Qudos Bank Arena in Sydney Olympic Park last night, eager to see the ‘Secrets’ singer in action.

The feeling both outside and in the arena was electric and you could feel the anticipation in the air. What was truly amazing to see was the varied demographic of people that were in attendance.

There were young boys and girls who very well could’ve been seeing their first concert, teenagers, young adults, mums and dads and even a fair few rocking grandparents entering the doors to the arena, proving that P!nk is someone who can truly make anyone feel welcome and included.

Now, let’s get on with the show. As the lights dimmed inside the stadium to a roar of screaming P!nk fans just before 9pm it was time to ‘Get The Party Started’. And that’s exactly what she did.

A ginormous, hot pink curtain covering the entire stage suddenly dropped to reveal the woman we all came to see hanging upside down from a glittery, pink chandelier, taking us all the way back to 2001 with her old school, classic hit, ‘Get The Party Started’.  And there truly was no better way to get the crowd pumped for the rest of the show.

From the moment she started, P!nk didn’t stop for almost two hours, singing, dancing along with her backup dancers and of course flying well above the audience in her death-defying trapeze tricks that make every single person gasp in awe.

Seriously, this woman is a mother-of-two and she has more stamina and physical strength than we could ever hope to have! Teach us your ways oh mighty P!nk…

During the show there was a mixture of songs from her most recent album and tour title, Beautiful Trauma, including the name-sake song, Secrets, Barbies, What About Us and Revenge, which even featured a blow-up Eminem to rap his parts of the song. 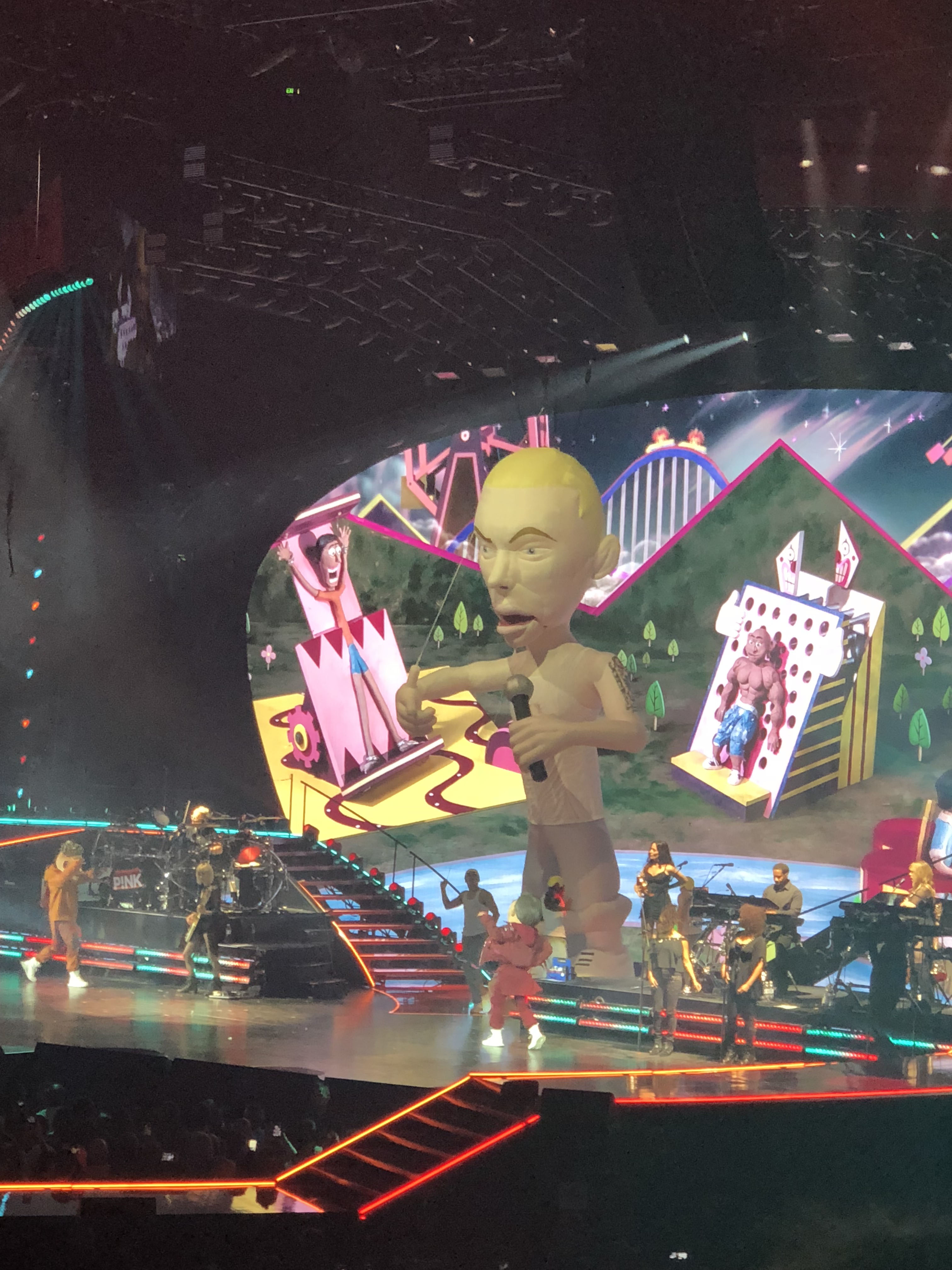 We were of course also treated to some of P!nk’s classics from back in the day including Just Like A Pill, Who Knew, Funhouse (Gwen Stefani edition, as it was mashed up with No Doubt’s, Just A Girl), I’m Not Dead, and the absolute crowd pleaser, F*cking Perfect.

For us though, it was the trip to a dark fairytale world that looked like a scene out of Little Red Riding Hood that stole the show, with the entire crowd singing along to Try and Just Give Me A Reason as P!nk flew above the stage on a floating bed of all things. 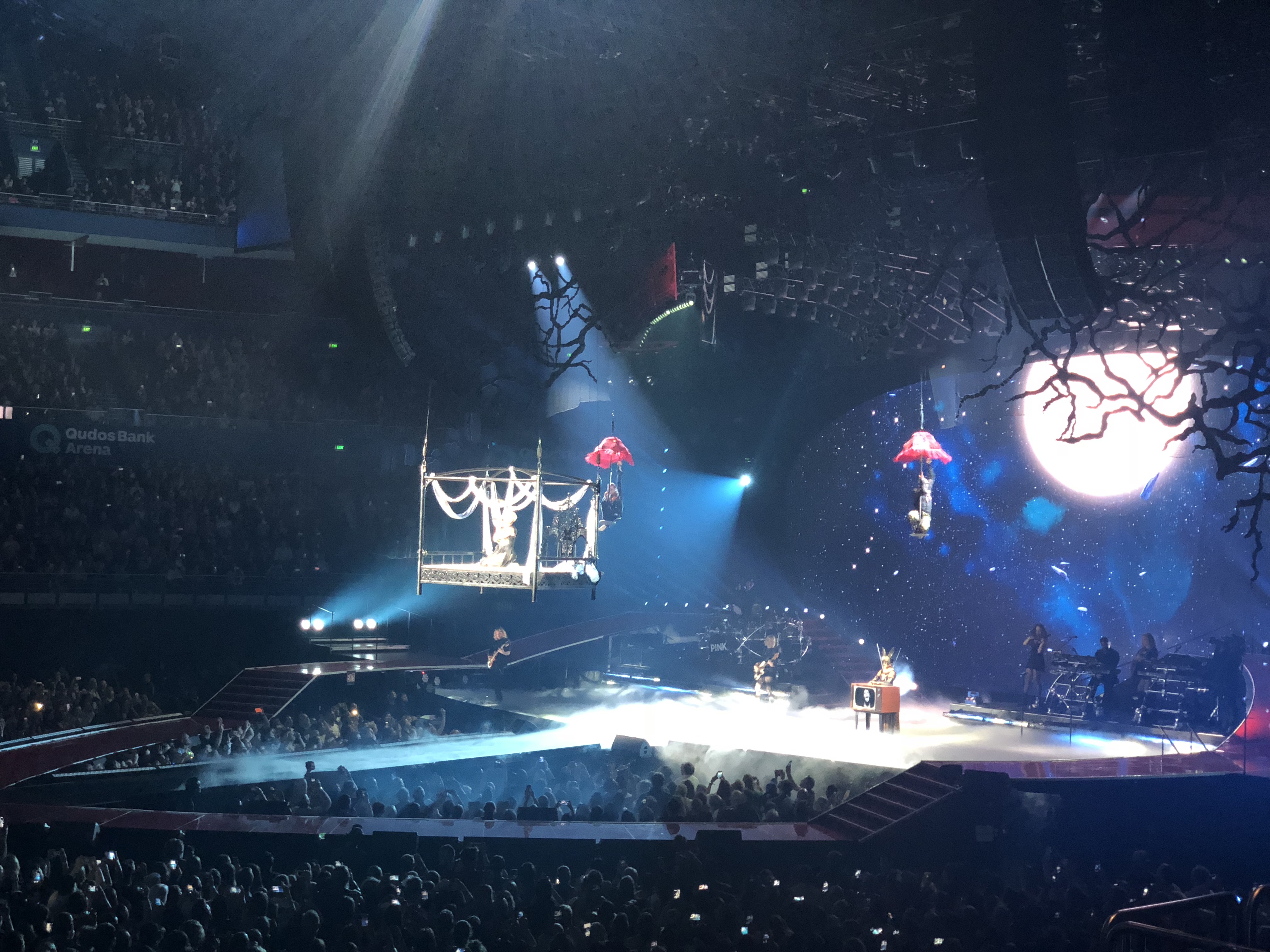 With all of the costume changes, set changes, well thought out graphics, lights, lasers, confetti, fire (yes, literal fire) and just pure energy displayed on stage, P!nk’s show was more of an artistic spectacle than your average concert.

This was also demonstrated beautifully in the short video interludes throughout the performance, one of which was a retelling of the moving speech that P!nk gave at the VMA’s last year about her daughter Willow.

The message touched on self-worth, feminism, and the fact that it’s okay to be different. In fact it’s not just okay, but it should be celebrated. And this message honestly brought tears to some members of the audience.

It brings us back to what we said earlier, about P!nk managing to not only entertain but bring feeling and emotion to the audience. One sentence that she said that stuck with us was “we’re all a bit pink on the inside” and it felt like it almost needed an “AMEN” after it because everyone in the crowd was feeling so empowered, loved and encouraged by P!nk’s moving speech.

But of course it’s not just P!nk’s uplifting messaging that makes her stand out from the crowd of other performers. It’s the fact that she clearly loves what she’s doing, adores her fans and truly wants to be there on stage giving them the best performance that she can. And she definitely succeeded on this front.

The entire night was rounded off beautifully with her final two songs and before we knew it, it was time to raise our glasses to P!nk and blow her one last kiss. But not before little Willow made an adorable appearance, running on stage at the last moment to give her mumma a big hug!

And just like that, it was over. Or so we thought… It’s just not a P!nk concert without a final encore to send the crowd off with a proper goodbye.

P!nk strapped herself in for one last Trapeze stunt and this time she treated the entire arena to front row seats, flying and twirling around to every corner of the room as she sang, without missing a beat might we add, to So What.

And while this type of theatricality may be P!nk’s specialty, her final goodbye was much more raw than any of us expected. Appearing for one final song, singing Glitter In The Air, P!nk emerged in jeans and a T-shirt, no glitz no glamour, just her, a microphone and her stella voice. It was truly breathtaking and the perfect way to end her Beautiful – minus the trauma – performance.

After this night, we think that we need to start petitioning for P!nk’s nickname to be changed. You know how people refer to Beyonce as Queen Bey? Well, we reckon that P!nk should from now on be known as ‘Her Royal P!nkness’ because seriously she deserves a literal crown.

If you’ve got tickets to go and see P!nk in Sydney at one of her rescheduled shows, trust us, this woman is worth the wait and we can promise you with absolute certainty that it will be one of, if not THE, best performances you will ever see.

We bow down to you Your Royal P!nkness! This performance was off the charts. But if we had to give it a rating, we would without a doubt say 100000000/10!