P!nk has lashed out on Instagram after trolls commented on her toddler son’s penis.

The now-deleted original picture featured herself and her two children, Jameson, 2 and Willow, 7, with a pelican while on holiday.

The candid photo showed Jameson wearing just a white T-shirt after he had taken off his swim nappy.

His penis was just visible above his mum’s arm. 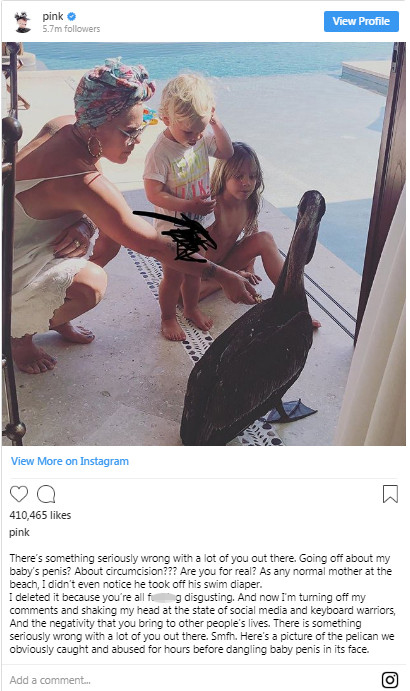 The singer captioned the snap: “Our new pet pelican. We named him Pelle.”

Thing is, trolls went in, commenting on whether the toddler was circumcised or not.

P!nk pulled the picture and reposted it with black scribble over Jameson’s genitals, saying “there’s something seriously wrong with a lot of you.”

“Going off about my baby’s penis? About circumcision??? Are you for real?

“I deleted it because you’re all f**king disgusting.

“And now I’m turning off my comments and shaking my head at the state of social media and keyboard warriors.”