Despite the fact that there’s been numerous celebrity weddings this year, we’re confident in saying that Priyanka Chopra and Nick Jonas’ wedding extravaganza takes the absolute cake for the best one.

Over the weekend the pair officially tied the knot in India in two ceremonies and the first official portraits have finally been released giving us our first look at the couple’s breathtaking wedding outfits.

And we’re not joking, your jaw is going to drop when you see both of Priyanka’s custom gowns.

The multi-day celebration over in Priyanka’s home country reached it’s peak with two ceremonies, a Western style one and a more traditional Hindu ceremony.

The Western ceremony took place on Saturday at the Umaid Bhawan Palace in Jodhpur where they were joined by 225 guests.

For this ceremony, where Nick’s father officiated the nuptials, both Chopra and Jonas were dressed in Ralph Lauren designs.

Priyanka’s white wedding gown was a column dress with a high neck, hand-beading and embroidery from the American designer. It was paired with a simply spectacular 75-foot long veil. And tbh now we also want that is this extra for our own wedding day. 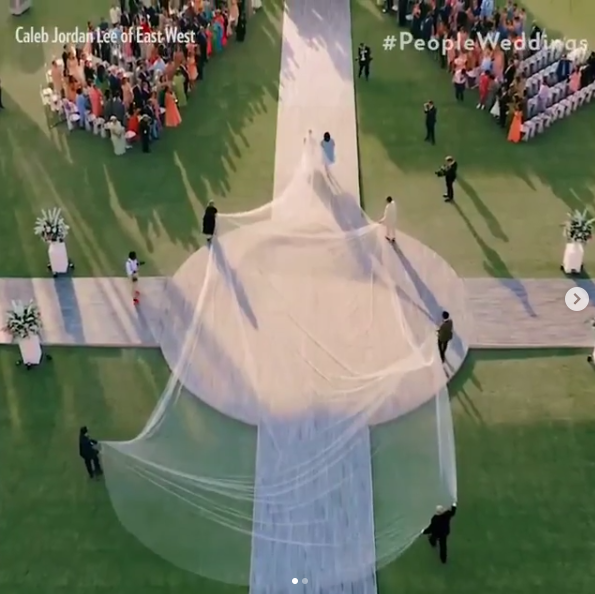 Nick looked dapper as ever in his simple, black Ralph Lauren double-breasted tuxedo paired with a white shirt and black tie. In a heart-melting detail, Nick had a piece of the bride’s dress sewn into the lapel of his jacket right over his heart with the words “My Jaan” embroidered on it, meaning “My life”.

“The emotions were running high during the ceremonies, I think especially during the Western wedding for me,” said Jonas of Saturday’s event.

“You know you think your whole life about that moment. Honestly, I could not have imagined it would be as perfect as it was. It was highly emotional,” he continued.

The attire for the actress and pop star’s Hindu ceremony on Sunday was much more traditional but just as gorgeous.

On this occasion the ‘Close’ singer was also dressed head-to-toe in traditional Indian clothing featuring a hand-quilted silk sherwani and a hand-embroidered chicken dupatta with a charred tissue safe on his head.

“I love that our wedding was a religious mash-up,” said Priyanka of the two beautiful ceremonies.

“We took beautiful traditions that we both grew up with and personalised them in a way that made sense for us. It’s been incredible to find the commonalities between our beliefs and figuring out how to blend them in a respectful and meaningful way.”

And while these photos alone are enough to bring us to happy tears at the love that is clearly shared between these two, it seems we definitely aren’t the only ones without dry eyes.

“It was all tears. All tears,” Chopra said to People. “I could not hold it in. I think I was nervous and scared. But as soon as the curtains opened, and I saw his face it was just like everything settled and I knew I was making the best decision of my life.”

Congratulations Mr. and Mrs. Jonas! Please keep the photos coming! We could stare at these all day!