I didn’t mean to trigger you into 2005 but OG social media platform ‘Bebo’ is making a comeback for some reason.

The platform was all the rage with teens in the mid-2000s until MySpace came and kicked them to the curb.

What better year for them to pick themselves up and dust off their jackets than 2021, the year where apparently ANYTHING can happen.

After almost a decade of silence, ‘Bebo’ posted an announcement on their main page… 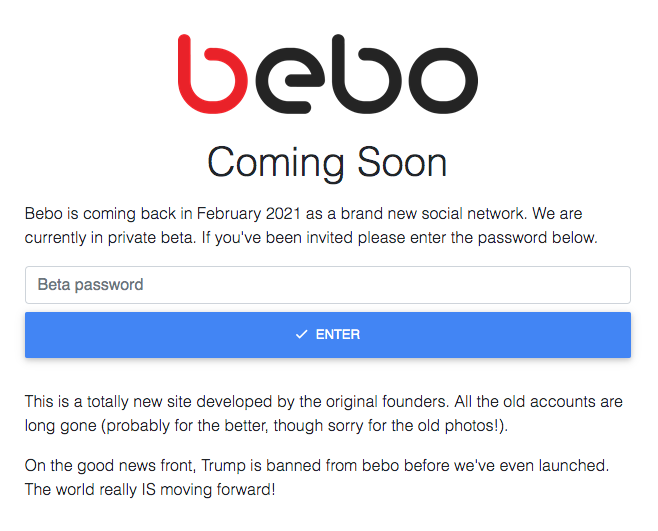 “Bebo is coming back in February 2021 as a brand new social network.”

“This is a totally new site developed by the original founders. All the old accounts are long gone (probably for the better, though sorry for the old photos!)

“On the good news front, Trump is banned from bebo before we’ve even launched. The world really IS moving forward!”

Okay!! Sense of humour! Loving it!

Remember tagging your friend’s pages? Choosing your ‘other halves’?

Did you know B.E.B.O stands for ‘Blog Early, Blog Often’? Because I certainly did not.

Well keep your eyes on that page but I’m not sure how many more social apps we as humans really have time for, but I wish them all the best!