Starring Asher Keddie and Richard Roxburgh, The Hunting follows the story of four teenagers, their parents, teachers and friends through the lead up, revelation and aftermath of a nude teen photo scandal. 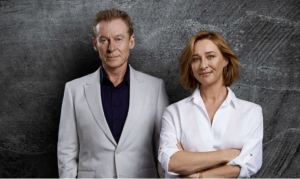 Speaking about the new series Keddie said The Hunting will ignite conversations to help raise emotionally intelligent and respectful kids.

“There are so many hard-wired ideas we’ve grown up with that we’re realising are unacceptable,” Keddie said.

“I have four and nine year old sons, and the world that they are navigating is vastly different to the one I grew up in.”

Roxburgh says it’s a must watch.

“This series explores deeply entrenched patterns of behaviour,” he said.

“It’s critical for us to understand that the ripples of this behaviour have consequences, and in particular, they permeate masculine culture everywhere. Any parent will be aware of the new pressures of dealing with the conundrums of social media once your children can go down the rabbit hole of accessible internet.”

The four-part drama series will premiere on SBS at 8.30pm Thursday 1 August.

Here's one of our favourite moments from Robin Terry & Kip!
3pm pickup tv

Bec Judd Shares Rare Throwback Photo Of Her Formal In 2000

Bec Gives HelloFresh A Go ... And This Is What She Thinks!

Bec Gives HelloFresh A Go ... And This Is What She Thinks!