Iconic Aussie actor Ray Meagher, best known for playing Alf Stewart in Home & Away is alive and well, although friends, family and fans alike could be forgiven if their hearts skipped a beat this week.

Facebook users were surprised by wording in a post from WHO Magazine on the weekend, which led some people to believe that the actor had died.

In the since-deleted post, the magazine gushed about Meagher’s career and character using phrasing typically reserved to pay tribute to actors in memorial.

WHO posted a photo of Meagher with fellow Home & Away actor Georgie Parker, writing “The whole cast and crew love you very much”: Tributes are flowing for Home And Away’s most iconic star, Ray Meagher. 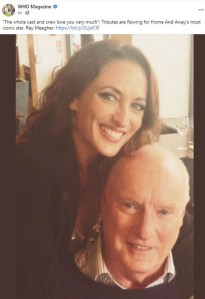 Don’t know about you, but that sounds like an alarmist headline if we’ve ever read one.

Users were quick to pile on the magazine for their “disgusting” use of a “clickbait” headline with many labelling it misleading.

Thankfully, we can report that Ray is alive and well. The post was just a bit of a misguided attempt at celebrating the actor’s 77th birthday.