Co-host of 97.3FM’s 3PM Pick Up program and cook book author, Yumi Stynes, has cancelled an appearance on Studio 10 this morning following a heated on-air argument with Kerri-Anne Kennerly.

Yumi was expected to appear as a guest host on the Network Ten breakfast program this morning alongside Kerri-Anne to showcase her cookbook recipes, however, she has since announced on Instagram that she has dropped out.

“I was booked [to] come in to showcase a recipe from one of my cookbooks (-Emergency Crumble from the Zero F*cks Cookbook, if you’re interested)..” she began. 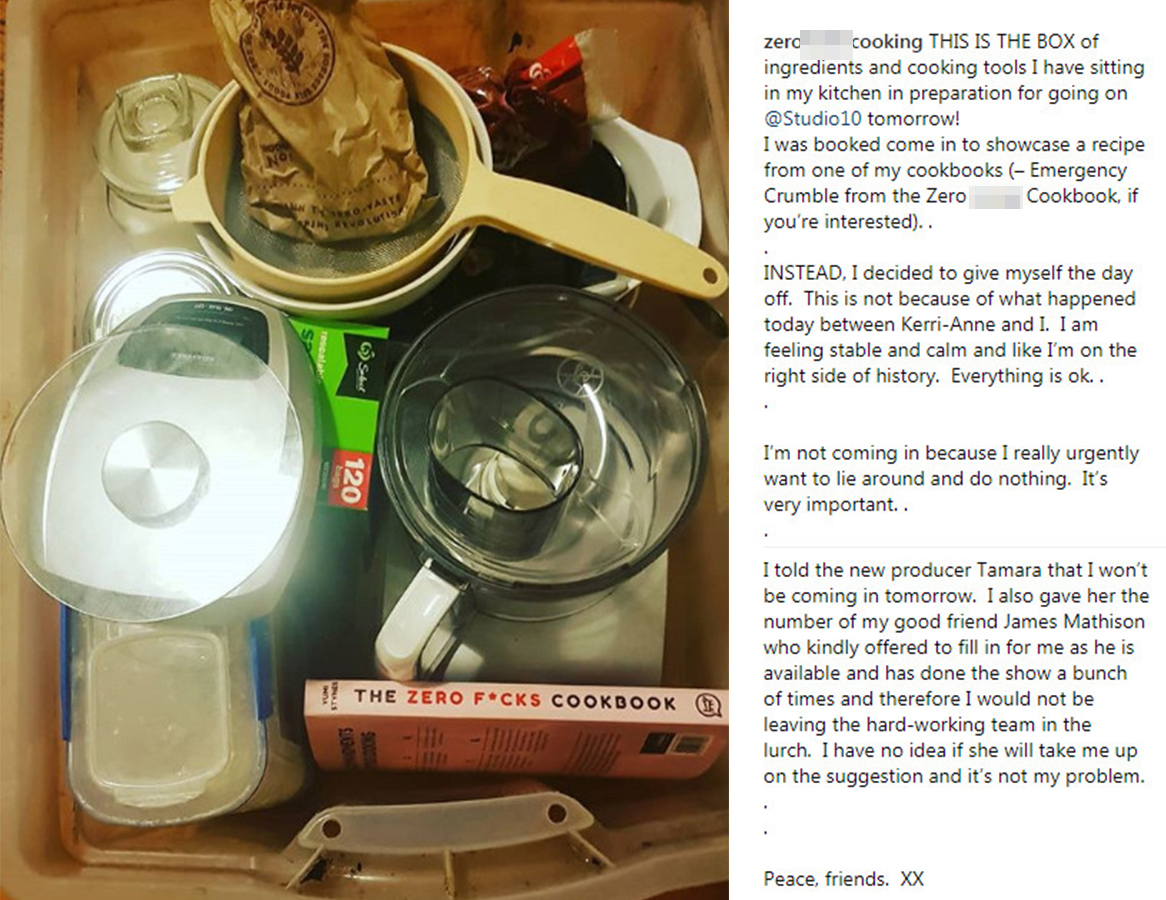 “Instead, I decided to give myself the day off. This is not because of what happened today between Kerri-Anne and I. I am feeling stable and calm and like I’m on the right side of history. Everything is ok.

“I’m not coming in because I really urgently want to lie around and do nothing. It’s very important.

“I told the new producer Tamara that I won’t be coming in tomorrow (sic). I also gave her the number of my good friend James Mathieson who kindly offered to fill in for me as he is available and has done the show a bunch of times and therefore I would not be leaving the hard-working team in the lurch.

“I have no idea if she will take me up on the suggestion and it’s not my problem. Peace, friends. XX”

In case you missed it, Stynes and Kennerly clashed on-air yesterday over a discussion about ‘Invasion Day’ protestors. The discussion heated up when Stynes suggested that Kennerly was sounding “racist”.

“What about the 5000 people who went through the streets making their point known?” asked Kennerly.

“What have you done? Zippo!”

Yumi was quick to respond saying, “That is not even faintly true Kerri-Anne and you’re sounding quite racist now.”

Kennelly expressed that she was “seriously offended” by Yumi’s accusations but the 3PM Pick Up host didn’t waver on her opinion.

“Where are these people on one day of the year? You’d be better off going and doing something positive,” Kennerly said.

“Just because I have a point of view, Yumi, doesn’t mean that I’m racist.”

“You’re actually connecting rape, child abuse and you’re drawing a straight line,” Stynes said. “With that statement, you’re also implying that those 5000 protesters, none of whom you know personally, are all lazy and idle and indolent,” she concluded.

Watch the entire on-air debate in the video above.