There’s no denying that shoppers go crazy for ALDI’s Special Buys. Who would’ve thought something as simple as a rocking chair would have people lining up with trollies across the country?

However, there is a new player in town and it could topple Specials Buys on its head. The name? Coles Best Buys.

Doesn’t sound familiar at all does it?

Coles has announced it will start rolling out a fortnightly selection of deals across the country. Its first batch of goodies includes a slick set of cast iron cookware, silicone cooking utensils and even a dog bed. 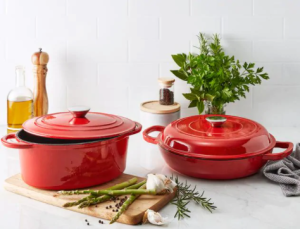 At this stage, Coles Best Buys is being trialled at select stores in Victoria and WA but will be launched across the nation within the next few weeks.

Who will win the ‘Buys’ wars? Only time will tell… but until then, look up some air fryer recipes!

It's National Burger Day And Grill'd Is Giving Away A Years Supply Of Food, So Get Your Skates On