You know how sometimes you absolutely cop it for something that you know is just not your fault?

This is exactly what happened to a Sydney man who woke up to find what he describes as “an absolutely deranged letter”.

Comedian Tom Cashman tweeted a photo of the letter he received from neighbours after his new cleaners left his rubbish strewn all over the footpath. 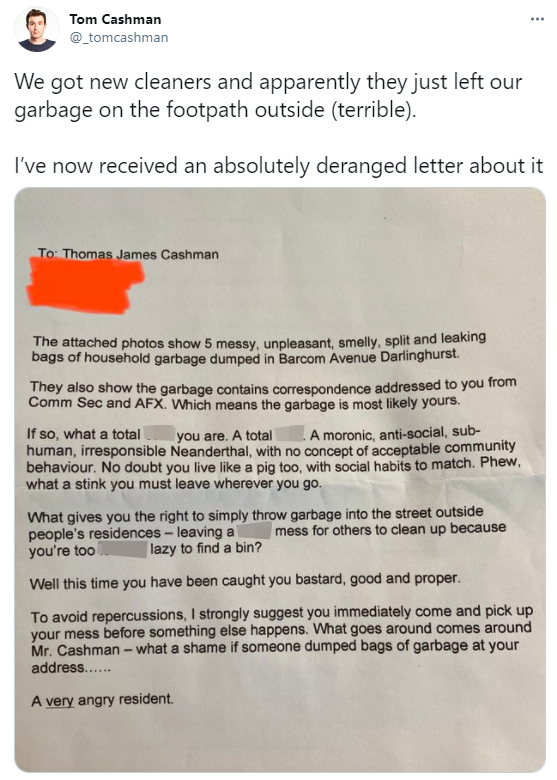 The letter, which was left for the comedian with several photographs of the rubbish, accuses Mr Cashman of being a “moronic, anti-social, sub-human, irresponsible Neanderthal”.

“What gives you the right to simply throw garbage into the street outside people’s residences,” the anonymous and angry correspondent asks.

The writer of the letter goes on to threaten the comic, suggesting that he “immediately come and pick up” the mess before “something else happens”, signing off as “A very angry resident”.

Mr Cashman went on to tweet that the person who wrote the angry letter had apparently gone through his rubbish to find mail addressed to him.

People were quick to poke fun at the severity of the letter, with one person suggesting printing out thousands of written responses and leaving them on the footpath, with another simply predicting that the recipient of the letter is now “going to be murdered unfortunately”.