A new website is helping Aussies get their hands on rapid antigen tests (RATs) as demand for the COVID-19 tests soar.

The website ‘Find a RAT’ has real-time info on where tests are in stock across Australia.

Designed by Matt Hayward from software agency PipeLabs, users can type in their postcode to search local pharmacies, supermarkets and other stores, and their RAT test availability.

There is also a map which people can interact with, indicating where tests are in stock. 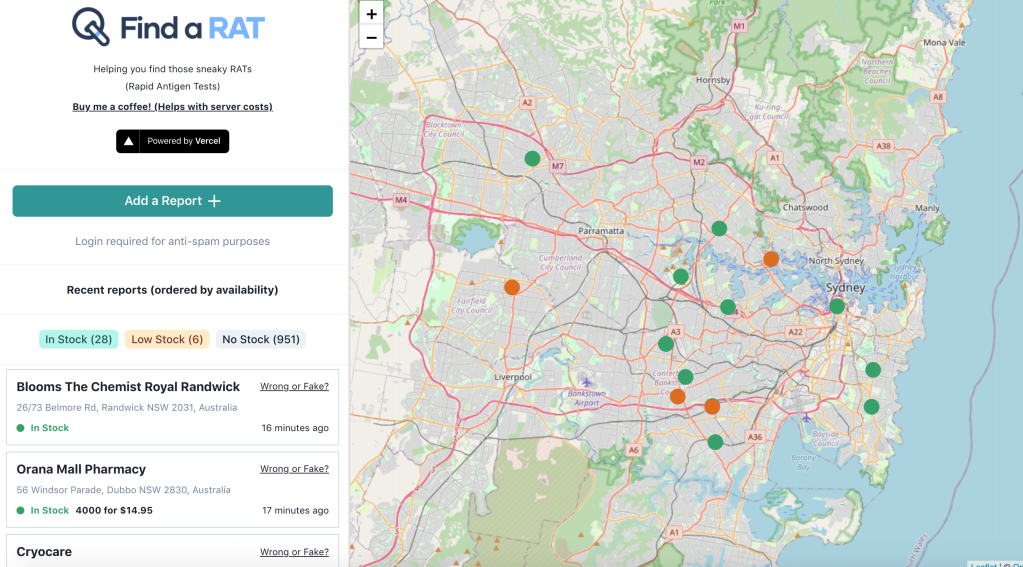 The websites’ launch comes as more and more people come forward demanding the government provide free tests for everyone.

After a national cabinet meeting on Wednesday, Prime Minister Scott Morrison announced a limited number of rapid antigen tests (RATs) would be provided free to six million concession card holders across Australia, with each person able to get 10 over the next three months.

However, the changes will not yet help NSW keep track of its escalating infections, with the scheme not expected to be up and running for a fortnight.

Rapid tests will remain in short supply and testing sites overwhelmed in the meantime.

“We are very supportive of the idea that a PCR test doesn’t need to be the standard now for people who have already had a positive rapid antigen test … we need more rapid antigen tests in the community so that people can be making good choices about activity, but also detecting disease early so that then they can stay away from others,” Dr Bonning told Nine’s Today on Thursday.

The AMA is meeting with NSW Health on Thursday hoping to establish how infections will be tracked.