Two words for you, Retail. Arbitrage; the purchasing of an item from one market, and selling of it in another!

In this case, ‘Woolworths Brick’ collectables have had shoppers racing to get their hands on one of the coveted $10 trucks!

What’s all the fuss about?

You might remember the “Ooshies,” a free item that would be awarded if you paid a certain amount at the checkout. These “Ooshies” found themselves on places like eBay selling for crazy prices, especially if they were considered “rare.” They became something you would collect like Pokémon, or AFL cards… What’s crazier is in 2019, customers attempted to cash in on the rare ‘furry Simba’ from the Lion King Ooshies set on eBay, with bids fetching up to $100,000.

‘Woolworths Brick’ collectables are fast becoming the “next” item selling for as much as eight times their price on third-party websites! People are making over 8x the original price of the product, reselling the toys for up to $90 each.

There are now over 600 listings for Woolworths Bricks on eBay, ranging from a single $3 Bricks pack to a $300 full set of 40 collectables. 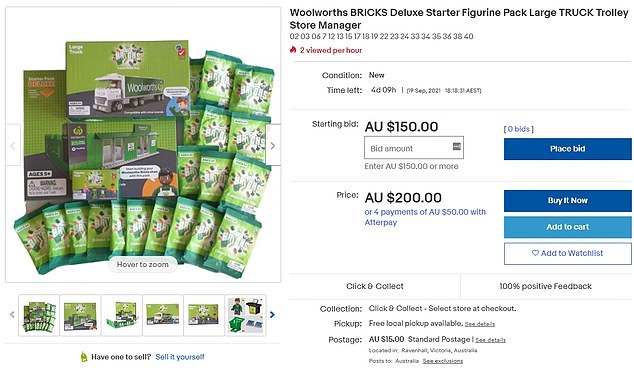 Woolworths have quietly announced that there will be a ‘rare’ collectable joining the set, with more than 400 packs circulating around Australia.

The exciting thing for these particular collectables is that customers will have the option to drop pre-loved Bricks collectables to any Woolworths store to be recycled.

These come in response to Woolworths commitment of creative conversations about sustainability and a greener future.

The supermarket chain launched the promotion across Australia except for NSW and ACT where’s it’s delayed until September 22 (tomorrow!) due to Covid-19 restrictions.

Shoppers will be able to collect Woolworths Bricks no matter how they choose to shop – via Pick Up, Direct to Boot, online home delivery or in store.