The landmark victory in a five-hour, 24-minute war of attrition that finished past midnight on Monday morning vaulted the Spaniard one slam clear of great rivals Roger Federer and Novak Djokovic on the all-time major titles leaderboard. 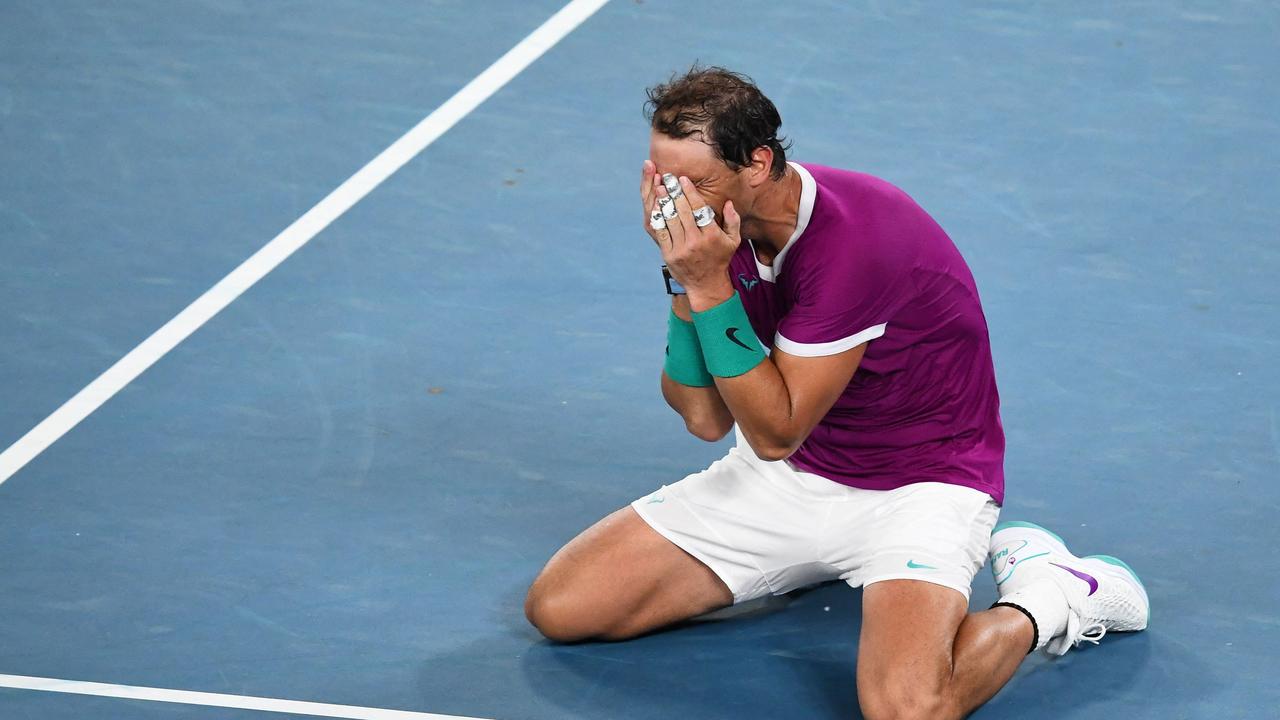 “If we put everything together – the scenario, the momentum, what (it) means – yeah, without a doubt (it’s) probably the biggest comeback of my tennis career,” said an overjoyed but exhausted Nadal.

The sapping encounter was the second-longest final in Open history, behind only Nadal’s five-hour, 53-minute loss to Djokovic in 2012 and left the 35-year-old admitting he was feeling “destroyed, physically”.

In claiming the Norman Brookes Challenge Cup for a second time, 13 years after his first triumph, Nadal also joins Rod Laver, Roy Emerson and Djokovic as only the fourth man in tennis history to win each of the four grand slam titles at least twice.

“Without a doubt, it’s one of the most emotional moments in my tennis career,” Nadal told the crowd.

“I’m going to keep trying my best to come back next year.”

Laver, fittingly, enjoyed a front-row view in the arena named in his honour as his fellow southpaw pulled off one of the most incredible wins of his legendary career.

Seemingly on the canvas after dropping the second set from 5-3 up, Nadal somehow conjured his first escape from two sets down since beating another Russian, Mikhail Youzhny, in the Wimbledon fourth round in 2006.

Youzhny, though, wasn’t the world No.2, reigning US Open champion and riding a 13-match grand slam winning streak like Medvedev.

Even more remarkably, Nadal had only played two matches between last June and January because of a crippling foot injury and remained an Open doubt until after Christmas.

“One month-and-a-half ago I didn’t know if I would be able to be back on the tour and now I am here sharing the trophy with all of you,” he told his adoring fans.

It was 25-year-old Medvedev, a decade Nadal’s junior, who imploded mentally and physically.

He remonstrated with his box and complained to Australian umpire John Blom about the ball kids and then heckling spectators who were disrupting his serving focus.

“Can you take control please? A small ‘please’ is not enough,” Medvedev pleaded with Blom after dropping serve to fall behind 3-2 in the fourth set.

“Step up, man, it’s the final of a grand slam. Please step up. Please is not enough. They are idiots.”

But Blom’s more forceful intervention moments later couldn’t save Medvedev from surrendering the fourth set and, as Nadal lifted, the No.2 seed called for the trainer and needed pickle juice and his left thigh massaged to prevent cramping.

After Medvedev double-faulted on the opening point of the deciding set, Blom finally threatened offenders with removal if they continued shouting between the Russian’s first and second deliveries.

Security guards had already been called to the court to eject a refugee activist during the second set.

Medvedev’s last chance evaporated when he dropped serve in the fifth game and Nadal ended up sinking to his knees in exhausted delight after adding his second Australian Open title to his 13 French Open, two Wimbledon and four US Open successes.

Asked if he now felt he was the greatest men’s player of all-time, Nadal was typically humble.

“I feel honoured, lucky to achieve one more very special thing in my tennis career.

“Honestly, today I don’t care much, no? For me it’s about enjoying nights like today. That means everything for me.”